An animation path must be rendered beforehand for the film to be obtained.

To do this, select the icon with the film slate-board in the toolbar or select the Extras – render animation option.

The following dialog can be used to make settings for the format and resolution: 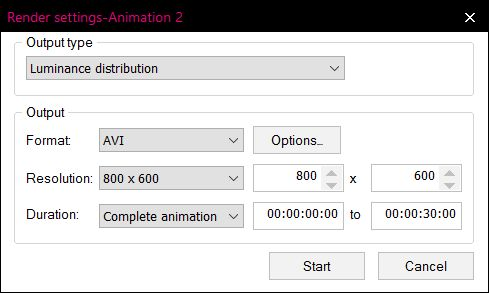 Output type: here the user determines the output type with which the film is to be generated.

It is possible to choose between “Uncalculated”, i.e. the normal 3D View, or “Luminance distribution” i.e. the calculated 3D View.

At the moment, calculated radiosity scenes can be rendered by this method but not raytracing scenes.

Format: Defines the output format for the film. With the “AVI” option, the film is calculated in the standard format used for Windows.

By clicking on Options, it is possible to select a codec that is available on the computer and also the desired compression stage.

As a further option, the film can also be saved as a series of individual pictures, and it is also possible to choose between “.jpeg” and “.bmp”.

Resolution: The most common film formats are listed in the selection box. You can also specify the film resolution that you would like via the input fields (width and height).

Duration: Here you decide which part of the animation is to be saved in the film. You can choose either “All pictures” or just “Current picture”.

With the input fields of “from” / ”to”, you can limit the animation to a duration that you select yourself.

By clicking on “Start” you call up a dialog which asks you where the target file is to be written to.

The user’s video folder is set as the default (My files/My videos). After confirming with OK, the rendering process will be started automatically. 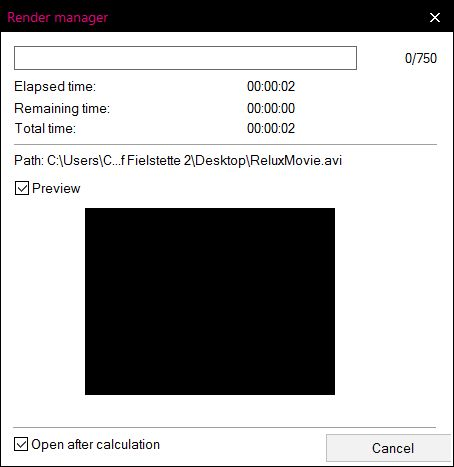 The checkbox can be used to show or switch off a preview. The preview shows which individual pictures are being written to the film.

The process can be stopped at any time in order to eliminate any setting errors.

If the film is to be shown in the Standard Player once the rendering is complete, the “Open after calculation” box must be checked.

Note: It is not possible to continue a rendering process that has been interrupted. The film is not saved in the Relux project file but in a separate file.