Once you have generated a row of luminaires, it is possible to set the basic parameters for this row.

To do this, you must mark the corresponding row of luminaires in the Scene bar.

The parameters will then be shown in the Tunnel bar, where you can change them.

In the Illuminance type input field, you can allocate the row of luminaires to interior or adaptation lighting. 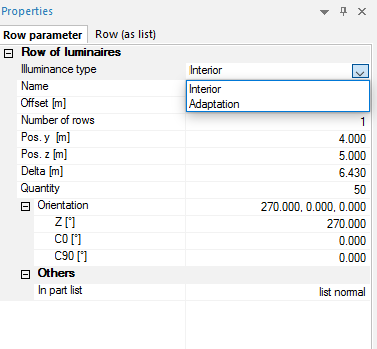 Allocating the luminaire type to interior or adaptation lighting

If a luminaire row is generated together with a number of other rows, these rows will automatically be synchronised

(if the luminaire type or the coordinates are modified, for example).

Two options are available in the In part list input field. The list normal option means that the selected row of luminaires is listed in the luminaire part list.

The already listed option means that the selected row of luminaires is not listed.

This option is used, for example, in the case of a tunnel with two-way traffic where a Relux calculation is conducted for each tunnel portal.

Since the interior luminaires are taken into account for both calculations, they would be included in both luminaire part lists for the Relux projects

and thus give an incorrect overall number of luminaires for the interior luminaires.

For this reason, the interior luminaires in the second Relux project will be defined with the already listed option.

Note: If a value of -1 is entered in the Number input field, the row of luminaires will be continued up to the end of the tunnel with the specified spacing of Delta. 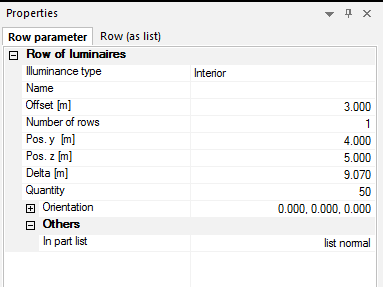 Compiling a row of luminaires for the whole tunnel

icon in the menu bar, the luminaire row will be shown in a list with details of the x-coordinate (distance from the tunnel portal),

the distance (delta) from the preceding luminaire, the control group and the luminaire power/luminous flux of the lamp. 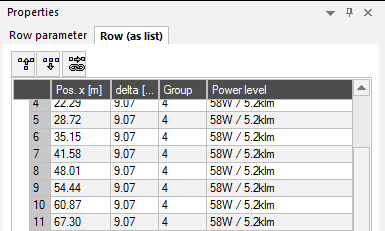 In the list view, you can make manual changes to all the listed parameters for each individual luminaire.

The x-coordinate and the distance from the preceding luminaire can be changed by entering individual values.

If a luminaire is to be moved by a specific value, it is also possible to position the cursor at the extreme right of the input field and then enter

a plus or minus sign and the desired distance by which the luminaire is to be moved. The program will then calculate the new value automatically. 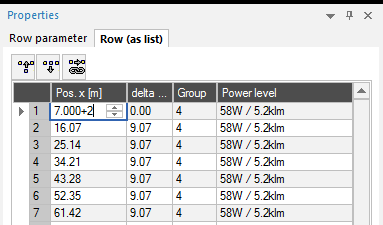 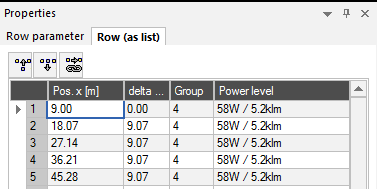 A displacement of 2 m is entered (left), and the automatically calculated new value then displayed (right)

It is only possible to change the control group and the luminaire power/luminous flux of the lamp if there are other options for these.

If only one control group or one luminaire type, for example, has been specified for the interior lighting, then it will not be possible to make any change.

It is also possible to change several luminaires at one and the same time. To do this, the desired input fields must be marked.

To mark an area, you should click to the left of the luminaire number on the first line to be marked, keep the left mouse button pressed and then move down, with the mouse,

to the last line that you wish to mark.

To mark several sections, you should click to the left of the number of the first line to be marked and then mark further luminaires by simultaneously pressing the Ctrl key

and making further clicks with the left mouse button. 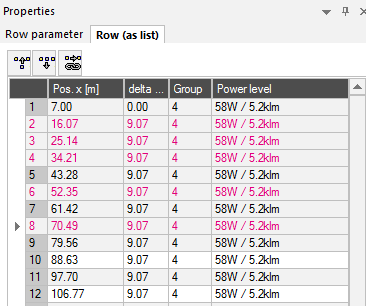 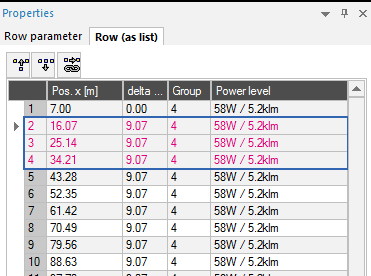 When you have selected one or more luminaires, you can use the following icons.

icon, you can enter a copy of a selected luminaire.

icon, you can delete the luminaire that you have selected.

icon activates move mode. You should mark the first luminaire to be moved and change its x-position and then, at the same time,

all the subsequent luminaires will be similarly moved by the same amount.

If you wish to change the values in the input fields for more than one luminaire, you must mark the desired lines in the manner set out above,

press the Ctrl key and simultaneously click on the input field that is to be changed.

You can then enter the new value, and this will then be adopted automatically for all the other input fields that are marked. 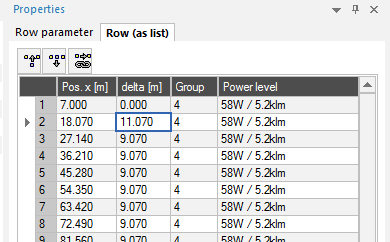 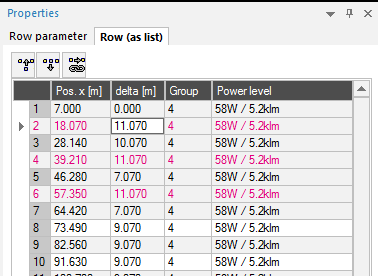 The options for automatic positioning are described in the Calculation chapter.