For illuminating sports facilities with the aim of creating good visual conditions for sportsmen, athletes, umpires and spectators, and also for permitting

television and film recordings, it is necessary to employ the camera point. This corresponds to the real position of a television camera and constitutes

a reference for calculating the illuminance on the measuring surface.

To add a new camera point, go to “Insert/Measuring object/Camera point“. With the first click on the floor plan or the 3D view, you position the camera. The mouse pointer

be skipped by pressing the "Esc" key, and the allocation can be made at a subsequent point in time.

It is also possible to create and allocate a camera point via the properties of the measuring surface. To do this, you should select a measuring surface and then, via the Properties, select

alculation and call up the calculation settings (see Figure). The measuring surface is allocated a new camera point via "Add/Camera". If no camera point exists, you will be asked to

position a camera point in the scene. In this same dialog, you can change the allocation of the camera points by using the list box in the last column. 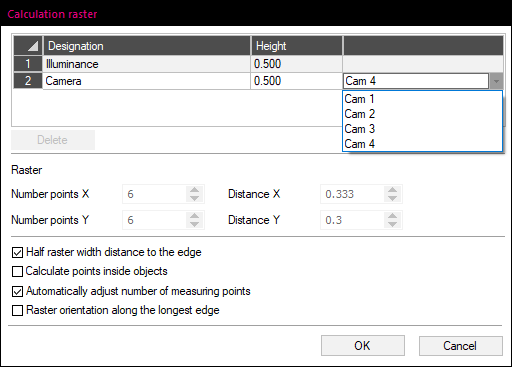 Allocating the camera point to the measuring surface

After calculating the scene, you can open the output for the camera illuminance as a table or as an isoline or false-colour diagram under "Calculation results/…/Camera illuminance".